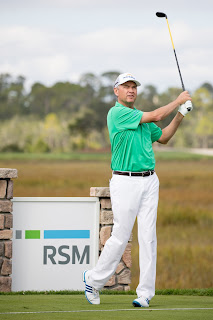 Earlier this week, Team RSM member Davis Love III was featured in a GoHeels article regarding exciting news – the University of North Carolina and The Rams Club named a men’s golf scholarship after him! The “Davis Love III Scholarship for Men’s Golf” was announced during a UNC men’s basketball game on Saturday. Below is an excerpt from the article:
“Love played at Carolina from 1982-85 and has been one of the most accomplished golfers on the PGA Tour for three decades. He was inducted into the World Golf Hall of Fame in 2017, won the PGA Championship in 1997, captained the United States' Ryder Cup winning team in 2016 and won 21 times on the PGA Tour.

It was an absolute thrill to have Davis back on campus and with the Carolina family," says UNC head coach Andrew DiBitetto. "Today's announcement marks a significant day for Carolina Golf. Davis is one of the most successful Tar Heels ever and he is also one of the most accomplished professional golfers to ever play the game. The Davis Love III scholarship will have a major impact on our program and student-athletes moving forward."

Over on the golf course, Team RSM Members Zach Johnson and Chris Kirk are playing in the Waste Management Phoenix Open in Scottsdale, Arizona. They will be joined by a few familiar faces, including past RSM Classic winners Austin Cook (2017), Mac Hughes (2016) and Robert Streb (2014). Below are their tee times for Thurs., Feb. 1: