This week, Team RSM Member Chris Kirk is playing in the Farmers Insurance Open at Torrey Pines in San Diego. Joining Kirk are past RSM Classic champions: Ben Crane (2011), Robert Streb (2014) and Mac Hughes (2016). The tournament tees off today (Thurs., Jan. 25), with Ben at 9:10 a.m. PST and Chris at 9:30 a.m. from tee No. 1, followed by Robert at 10:20 a.m. and Mac at 10:30 a.m. from tee No. 10. Best of luck to all “our guys” this week!
Earlier this week, Team RSM Member Zach Johnson was featured in a USA TODAY article about the similarities between how golfers pull together their trusted advisors to plan for the new year, very much the way that middle market business leaders elicit support from their business advisors to achieve success. Below is an excerpt from the article: 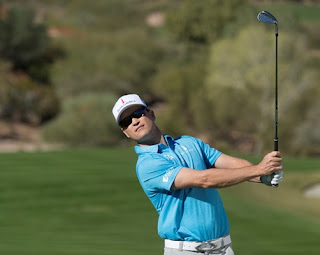 For more than a decade, Zach Johnson has held what amounts to an annual two-day summit to inspect every part of his game, figure out what needs to get better and make a plan going forward. He referred to the most recent meeting as the best one yet… Even so, he had to contain some excitement leaving his two-day meeting last fall that included everyone involved with his game — swing, mental and fitness coaches, statisticians, his wife and caddie, friends that hold him accountable, even his financial adviser.
Read the full article here.


The annual PGA Merchandise Show began earlier this week in Orlando. This is a fun event where those in the golf industry come together to discover the latest trends in golf equipment, technology, apparel, etc. The PGA of America shared a few of the items that caught their collective eye from the first day here.  Check out PGA.com for more updates from the show.


Check back next week for more on Team RSM, The RSM Classic (Nov. 12-18, 2018) and other golf-related news.
Posted by Unknown No comments:


Earlier this week, RSM US LLP (“RSM”) – sponsor of The RSM Classic – announced the addition of Chris Kirk, PGA TOUR professional and winner of the 2013 RSM Classic, to Team RSM. Kirk, a native of Atlanta and a former resident of Sea Island, home of The RSM Classic, claimed his first PGA TOUR victory at the Viking Classic (now the Sanderson Farms Championship) in 2011 and claimed the second of his four PGA TOUR victories at The RSM Classic in 2013. Most recently, he took home the trophy at the 2015 Crowne Plaza Invitational at Colonial.

“The game of golf and RSM have a lot of common, including our core values of respect, integrity, teamwork, excellence and stewardship. Over the past four years we have had an opportunity to get to know Chris and Tahnee, and we couldn’t be more excited to have the Kirk family as part of Team RSM. Chris’s passion for his family, his community and for the game of golf make him a great fit not only with RSM, but with the other members of Team RSM, as well.”  – Andy Bosman, chief marketing officer with RSM US LLP
This week on the golf course, Team RSM members Zach Johnson and Chris Kirk are playing in the Career Builder Challenge. Joining in the fun at La Quinta, CA for the tournament are past RSM Classic winners Ben Crane (2011), Kevin Kisner (2015), Mac Hughes (2016), and Austin Cook (2017). Below are their tee times for Thurs., Jan. 18:
Starting off the new year on a charitable note, the PGA TOUR recently shared an article about the total amount generated for charities by tournaments in 2017. The article discusses how the 2017 tournaments surpassed $180 million, which exceeded last year’s record by $14 million! Below is an excerpt from the article. Read the full piece here.
The announcement brings the all-time total generated for charity by the PGA TOUR to $2.65 billion. The TOUR surpassed $1 billion in 2005 and $2 billion at the beginning of 2014.
“The entire PGA TOUR family takes tremendous pride in the positive impact that we continue to make each year through the millions of dollars that are raised for very deserving charitable organizations,” said PGA TOUR Commissioner Jay Monahan. “As we often note, beyond the sheer dollar amount, the real story is in the hundreds of thousands of lives that benefit from these contributions every year. Thank you to all of the tournaments, players, sponsors, volunteers and fans who make all of this possible.” 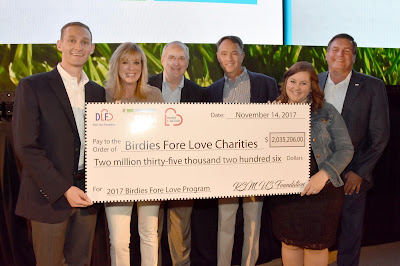 The shared focus on stewardships values is one of the reasons RSM got involved with golf initially. One of the most gratifying aspects of sponsoring The RSM Classic is the opportunity it provides to give back. Supporting nonprofit organizations, especially those focused on enhancing educational outcomes and the quality of life for children and families, is an extension of RSM’s rich history of community involvement – a history that began more than 90 years ago when our firm began in 1926.
Through The RSM Classic’s Birdies Fore Love program, thousands of RSM partners, employees, clients and friends donate each year to charitable organizations across the country.  With a match from the RSM US Foundation, we have been able to give more than $2 million to deserving organizations this year alone, bringing the grand total raised through the tournament to $9 million to date. And the numbers from this year’s tournament are still coming in.
Check back next week for more updates on Team RSM, The RSM Classic (Nov. 12-18, 2018) and other golf-related news.
Posted by Unknown No comments:

Happy New Year!
We hope you had a wonderful holiday season and that you were able to spend some quality time with friends and family. The East Coast is greeting 2018 with a winter storm, so we hope all those being impacted stay warm and safe!
With the start of each year comes new resolutions. If any of yours were golf-related, PGA.com shared five tips to help you keep those resolutions in 2018. Take a look at some of the tips and tricks. 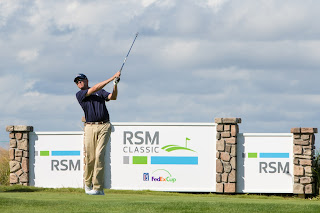 It’s a relatively quiet week for Team RSM, although Kevin Kisner, 2015 RSM Classic winner and Austin Cook, 2017 RSM Classic winner, is playing this week in the Sentry Tournament of Champions at Kapalua Resort in beautiful Hawaii. You can follow along here.
And as we begin the new calendar year, we thought we’d take a walk down memory lane. During the 2017 RSM Classic tournament week, we did a quick Q&A with multiple PGA TOUR players. Check out some of the interviews to get a little more insight on these players.
We’re looking forward to seeing what 2018 has in store for Team RSM and The RSM Classic (scheduled for Nov. 12-18 this year). Be sure to stop by next week for our next update.
Posted by Unknown No comments: