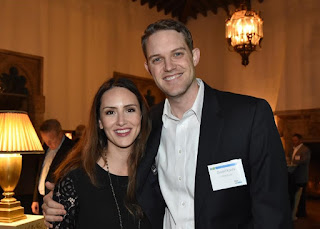 Today’s update is from Daniel Koehl, who is based out of RSM’s San Antonio office. Daniel had the opportunity to visit Sea Island for The RSM Classic this year, as a result of his leadership role in raising charitable funds through the firm’s Birdies Fore Love initiative. Read John’s first-hand account about his time at the 2017 RSM Classic below.
As a result of RSM’s San Antonio office’s Birdies Fore Love fundraising efforts to benefit children- and family-focused charitable organizations nationwide, one lucky person from our office was chosen at random to attend the 2017 RSM Classic.  As someone who has never won anything in his life, you can imagine my surprise when I received word that I had been selected as the winner! My wife Lindsey and I were soon whisked away to the luxurious grounds of the Cloister resort at Sea Island, GA. The Cloister is routinely rated as a five-star resort, so it goes without saying that the facility and its amenities were second-to-none. Once we got over the initial awe, we were taken to the grounds of the Seaside and Plantation golf courses, where The RSM Classic golf tournament is played. The course was in magnificent shape, and everywhere you looked there was either RSM signage of some sort or an RSM employee offering a warm greeting and responses to whatever questions.


The highlight of our stay was being recognized by RSM Managing Partner and CEO Joe Adams in front of a large group of RSM onlookers shortly before getting to meet, and take a picture with, Team RSM Member and professional golfer Zach Johnson who is also a Masters and British Open Champion, as well as a well-known family man and all around class act. Zach is a great representative of RSM, as he embodies so many of the qualities we pride ourselves on as a firm, including respect, integrity, teamwork, excellence and stewardship. It really was an honor to meet him, and I will certainly be rooting for him in this week’s tournament and beyond.


We were also fortunate enough to attend the Yamaha Pro-Am Draw Party at the Sea Island home of Team RSM Member Davis Love III and his wife Robin. Davis is a World Golf Hall of Famer, a PGA Championship winner, and former Ryder Cup player and captain. I could go on and on listing all of the accolades he has garnered throughout his career. Just as noteworthy as these on-the-course accomplishments is the work he’s done with the Davis Love Foundation. It was a very special moment to witness the RSM leadership personally hand Davis a check made out to his foundation for an amount in excess of $2 million!
Lindsey and I had a fabulous time and are so thankful to have been included in this fantastic week-long event. I’d be remiss if I didn’t acknowledge my San Antonio office cohorts and partner group for making our office one of the top fundraisers out of RSM’s 90 offices nationwide. Everyone in our office contributed to Birdies Fore Love. I am so thankful to be a part of the RSM team here in San Antonio, where our leadership group has always recognized the value of giving back to our local community, and have always set the tone for the rest of the team with their generous giving year after year.