This week, the PGA TOUR action is coming from Louisiana where the Zurich Classic of New Orleans is underway. And the TOUR is tipping its figurative hat to the Big Easy by sharing its Top 10 clips of nature intervening with tournaments in the past, including a visit from the infamous “Tripod” – Zurich Classic’s three-legged alligator. Watch the clips to see our very own Team RSM member Davis Love III’s reaction to a close encounter with Tripod at No. 6 (Think YOU would take a picture if you were that close to an alligator?):

A few of “our guys” are in New Orleans for the Zurich Classic this week: Team RSM member Chris DiMarco is joined by past RSM Classic winners Ben Crane (2011), Chris Kirk (2013) and Robert Streb (2014). Ben teed off first at 7:50 a.m. CT from tee No. 10.; shortly after at 8 a.m. was Robert from tee No. 1; Chris D. started at 9 a.m. from tee No. 1; and Chris K. teed at 12:30 p.m. from tee No. 10. Best of luck this weekend, guys…and keep an eye out for any unexpected visitors on the course!
Are you hitting the course this weekend? If so, check out this new PGA.com article for tips and tricks to improve your swing speed. The article shares the training routine Jordan Spieth used to add more distance to his shots.

Before closing out this week’s post, we’d like to take a moment to send our best wishes and hopes for a speedy recovery to 2012 RSM Classic winner Tommy “Two Gloves” Gainey. On Tues., April 26, he informed his fans via his social media accounts that he will be taking a leave of absence from the rest of the 2016 Web.com season, due to a back injury he got while playing at last week’s RBC Heritage Classic.  You can read his full note here. Get well soon, Tommy!
Be sure to stop by next week for the latest on Team RSM, as well as other golf-related news  – including, of course, any updates on this year’s RSM Classic (Nov. 14-20).
Posted by Unknown No comments:


The PGA TOUR recently shared its #ShotsOfTheWeek, and our very own Zach Johnson was highlighted. You can check out the top shots here but you can watch Zach’s shot below.
And while Zach was highlighted by the TOUR, Team RSM member Davis Love III made headlines this past week. The Ryder Cup conducted a Q&A with Davis about his recent performance at The Masters and potential Ryder Cup team members. You can read the full article here, but below is an excerpt talking about his memorable hole-in-one from the 2016 Masters: 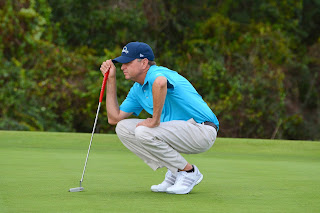 Right when I struck the tee shot, I heard a woman say, "That's perfect."
Then, once the ball started rolling on the green, I heard a guy say it was going to break right into the cup. Sure enough, that's what it did. People were jumping out of their seats and the roar was amazing. It was incredible how loud it was. I've chipped in on that hole on Masters Sunday before and, man, I thought that was loud. But Sunday's hole-in-one? That was the loudest roar I think I've heard in my career.
Way to go, Davis – you make your friends at RSM proud!
Check back next week to learn the latest on Team RSM and other golf-related news – including, of course, updates on this year’s RSM Classic (Yep, it’s only April, and we’re already thinking about November!)
Posted by Unknown No comments:

An Ace and A Cake 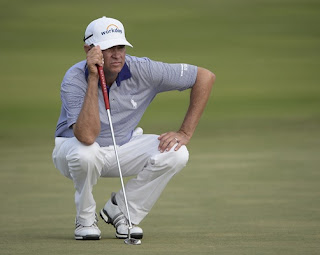 Last week was a fantastic week of golf at The Masters! One of our favorite moments came from our very own Team RSM member Davis Love III when he made a hole-in-one on No. 16 Sunday! It was a phenomenal shot – if you missed it, be sure to check out the video here.


And on a somewhat related note, #DidYouKnow that Olympic gold medalists from the 2016 Summer Games in Rio de Janeiro are invited to all the majors in 2017? The men’s winner will receive invitations to The Masters, U.S. Open, Open Championship and the PGA Championship, while the women’s winner will be invited to all five of the LPGA majors. Learn more in this article on PGA TOUR.

St. Simons Island, GA – home of The RSM Classic – is vying this week for USA Today’s ‘Best Coastal Small Town 2016’ award! If you have a few minutes, check out the complete list of nominees and vote for your favorite! We might be a bit biased but, we know who we’re voting for!
Before wrapping up this week’s post, we want to wish a very happy birthday to Davis Love III, who celebrated his special day yesterday (April 13). Leave your wishes below in the comment section and we’ll be sure to pass them along to Davis. Like most of us, he always appreciates good birthday wishes.


Be sure to stop by next week to learn the latest on Team RSM and other fun golf-related news – including, of course, any updates on this year’s RSM Classic (Nov. 14-20). It’s still about seven months away, but we’re already gearing up for another successful tournament!
Posted by Unknown No comments:

Breaking Records at The Masters

The 80th Masters tournament officially teed off today (Thurs., April 7) but there was a lot of commotion at Augusta yesterday. During the annual Par 3 Tournament, an astonishing nine players made holes-in-one, setting a new record! Included in those nine were our very own Team RSM members Zach Johnson and Andy Sullivan! Watch them sink their holes-in-one on The Masters Twitter account (Zach’s Shot | Andy’s Shot). If this isn’t a great start to their weeks, we don’t know what is!  And, if you want to see the other seven, check out this video!


Team RSM member Davis Love III is at Augusta, as well, along with previous RSM Classic winners Chris Kirk (2013), Robert Streb (2014) and Kevin Kisner (2015). Their tee times are below:

Best of luck to “our guys”! We’ll be watching and cheering them on throughout the weekend. Who do YOU think will be sporting the green jacket Sunday? 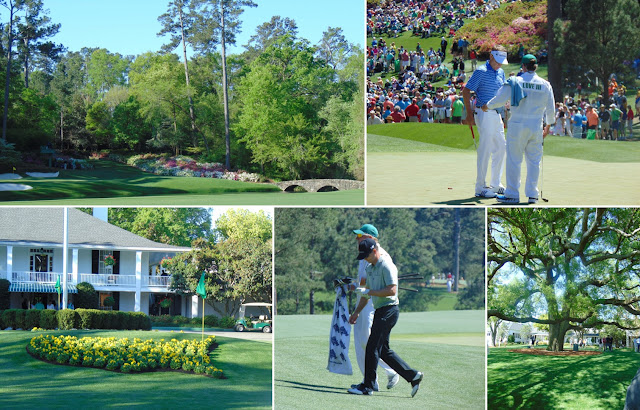 Leading up to The Masters, Team RSM members have been in the news quite a bit. Davis spoke with CBS about how he prepared for the week. Watch the interview below:

Golf is really all about sharing the knowledge of the game – this week especially! We’ve read multiple articles about players passing along tips and techniques about how others can play their best game during this prestigious tournament. The PGA shared an article about last year’s RSM Classic Champion Kevin Kisner getting insights from Team RSM member Zach Johnson. "I got to pick his brain a bit. He's a champion, so it was a good experience," Kisner said. Sky Sports did a similar feature with Team RSM member Andy Sullivan getting advice from two former Masters champions. The article quotes Andy saying, "It was really cool. Mark O'Meara and Mike Weir were in the group ahead of me and invited me to join them," Sullivan told Skysports.com. "It was great to play with them and pick their brains. Obviously it's my first Masters and I need to get as much information as possible.” You can read the complete article here.


The PGA Tour features a breakdown of the Augusta National Golf Club holes, with perspectives from the players. Our very own Zach Johnson talked about holes No. 9 and 18. Below is an excerpt of his perspective but you can read the full article here. It’s a great read, especially if you plan on watching!


No. 9: 460 yards, par-4
“Carolina Cherry”
Zach Johnson (2007 Masters champion) says: “It’s a tee shot that looks fairly daunting. You can’t see where your ball ends up, but there’s a tree out in the distance that is your target. It calls for a draw because the fairway goes right-to-left, but you can still play a power-fade because it does open up on the right side. The other thing that’s hard about it is that when you get back in that little hollow back in the tee box, you don’t really feel the wind, so whatever you feel on 8, you have to remember it for 9. The second shot is on a severe downhill lie hitting severely uphill, so it’s one that with a three-tiered green, a false front, hitting it to the middle of the green is pretty good. The front pins are the hardest on that hole because it’s hard to keep it on that level. Missing it right on that hole on the second shot isn’t ideal, but isn’t that bad because you’re kind of chipping back uphill. It’s usually a driver and mid-iron for me.”


No. 18: 465 yards, par-4
“Holly”
Zach Johnson (2007 Masters champion) says: “It’s a tough hole. It’s very much a chute. You have more fairway on the right than it looks. It calls for a power fade off the bunker out there. Some guys can get to that bunker downwind. I can’t. The tee shot is slightly uphill. The second shot is 6-7 percent uphill, so if you have 200 yards, it plays 10-15 yards longer. The green looks really, really small to the eye from the fairway. It’s multi-tiered with a false front. Middle of the green, especially with a mid-iron, is ideal. The ball will roll back if the pin is up front. It’s hard to get up-and-down long. On average, it’s usually a 5- or 6-iron. Anywhere from 180 to 215. If the pin is on the right side of the green, being left is never bad, and vice versa. If you short-side yourself, you’re making a bogey unless you make a long putt. The front-left pin on Sunday, you don’t want to be left.”


The Masters is debuting a new “Featured Group” channel that provides three hours of live action each day on Masters.com.  For today’s coverage, Zach Johnson is in the first group which started at 9:26 a.m. and Davis Love III is in the fourth group starting at 12:22 p.m. You can see who else is being featured here.


We look forward to a great weekend of golf, which is making us anxious to return to Sea Island for The RSM Classic (Nov. 14-20)! Check back next week for more updates.
Posted by Unknown No comments: