The Field – and the Excitement - Continue to Grow!


And since the tournament is just around the corner, we thought you might like to know about a few interesting supporters/sponsorships for this year:


·         Telluric Group LLC, which provides precision equipment to the military, training to police officers and protective services to business executives, has partnered with the Davis Love Foundation to support a Military Outpost for the armed services during the tournament. The Military Outpost is an exclusive venue near the 9th green, which includes complimentary food and non-alcoholic beverages for active-duty, reserves and retired military. It’s open from 10 a.m. through completion of play Thursday through Sunday during the tournament, so if you’re serving (or have served) our country, drop by! In addition to the Military Outpost, members of the armed forces receive special ticket pricing and Saturday is designated as Military Appreciation Day.
·    Also new during this year's tournament is MasterCard Priceless Perks! Cardholders are entitled to complimentary VIP ticket upgrades; all you need is your MasterCard®! All cardholders will have a chance to win upgraded tickets at the tournament during competitve rounds. For more information on how ti win, check the course mpa when you arrive at The McGladrey Classic. Click here for official contest rules. 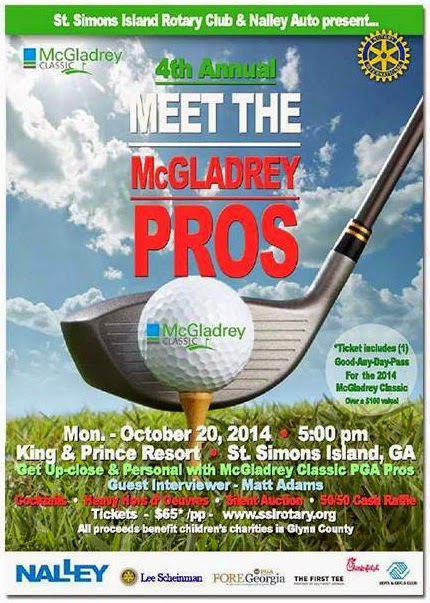 ·       The Rotary Club of St. Simons Island, in partnership with the Davis Love Foundation and Nalley Auto, will host this year’s “Meet the Local Pros” event on Mon., Oct. 20 at The King and Prince Beach& Golf Resort from 5 p.m. to 7 p.m. [Tickets are $65 per person and well worth it. Interested? Get yours today (insert hyperlink).

We’re looking forward to this year’s tournament – not only for the great golf and for the opportunities we’ll have to build relationships with clients and potential clients – but we’re also excited about (hopefully) seeing year’s McGladrey Classic Sweepstakes winner Joe Wytanis around the course – and to hearing his take on his experiences at the tournament!


Have you purchased your tickets yet? If not, do it now and while you’re at it, check out some of the merchandise you could sport while on the island!
Posted by Unknown