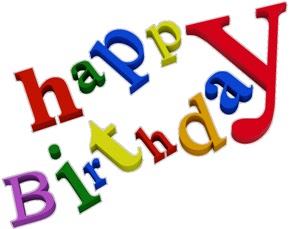 We’re starting this week’s update by wishing Team McGladrey Member Zach Johnson a belated HAPPY BIRTHDAY! Zach received a nice little birthday shout out from fellow Team McGladrey Member Davis Love III, via Twitter. (See below.) While we’re a bit late with our birthday wishes, the sentiment behind them is sincere.

﻿
And speaking of birthday’s today is McGladrey’s very own sports marketing team member Heather Fueger’s birthday! Be sure to leave your birthday wishes in our comment box and we’ll share them with Zach and Heather!

Next week, Team McGladrey Member Chris DiMarco is an alternate at the Puerto Rico Open. He is second in line, behind Joe Durant, to play if someone withdraws for any reason. We’ll let you know if he plays.

And looking a bit further into the future, plans are already getting underway for the 2013 McGladrey Classic (Nov. 4 – 10). Earlier this week, a small team from McGladrey traveled to beautiful Sea Island to meet with the Davis Love Foundation staff to discuss this year’s tournament. As you can imagine, there are a lot of details to iron out with an event such as this, but we can tell you that this year’s tournament is already shaping up to be one you won’t want to miss! We’ll keep you updated as things progress. In the meantime, be sure to check back next week for more updates.

Mother Nature flexed her muscles this week, dumping between one and two inches of snow in some unusual locations – including Arizona where the first round of the World Golf Championship-Accenture Match Play Championship was underway in Marana. The tournament was halted due to the weather, but will pick back up this morning (after a one-hour delay due to frost). If all goes as planned, play should be back on track tomorrow (Friday) – assuming Mother Nature cooperates. We’d like to wish Team McGladrey Member, Zach Johnson, the best at the tournament…and on staying warm!

Next week, The Honda Classic takes place in Palm Beach Gardens, Florida. As of right now, no Team McGladrey Members are scheduled to play. However, PGA TOUR players have until 5pm EST Feb. 22 to officially commit. We’ll let you know if any of “our guys” decide to play.

Keeping up with these PGA TOUR tournaments makes us look more forward than usual to The McGladrey Classic (scheduled for Nov. 4 – 10 this year). The 2013 McGladrey Classic Excitement Video launched this past Monday, though, so that’s given us a bit of a taste of the event. And after watching the weather in Marana, we’re more anxious than ever to return to beautiful Sea Island! Check out the video to get YOUR McGladrey Classic fix!


We received very good news recently about Team McGladrey Member Davis Love III, post-surgery. We hear that he’s feeling great and seeing improvements each day. You can check out his Twitter update, and send him a get-well tweet there if you’d like.

Also this week, the PGA TOUR Wives Association (PTWA) released a new book, “Beyond the Fairways and Greens,”  to celebrate the association’s 25th anniversary. The book includes never-before-seen photos, stories and recipes, and includes Zach’s wife Kim, as well as Davis’ wife Robin. Both Kim and Robin are members of the PTWA, which includes more than 130 PGA TOUR families. Visit the PGA TOUR Wives Association to learn more about the organization and to purchase the book if you’re so inclined!

To stay current on tournament-related events and activities, check back here regularly and/or visit The McGladrey Classic (which is now only 255 days away).
Posted by Unknown 1 comment:

We’re in the Mood for “Love”… and Anything Else Related to Golf! 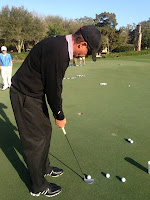 Happy Valentine’s Day! With love on everyone’s mind, there is one particular Love we’re thinking about: Team McGladrey Member Davis Love III, who is already back on the greens after his recent neck surgery. For pictures of Davis in pre-surgery and rehabbing it up, check him out on Twitter. Our favorite is the goofy picture of Davis in his pre-op outfit!

Team McGladrey Member Zach Johnson is in Pacific Palisades, CA for the Northern Trust Open, which kicks off today, after being at Colonial Country Club earlier this week for Media Day. (You can listen to his interview here.) Next week, he’ll be in Marana, AZ for the Accenture Match Play Championship. We’re rooting for you this week and next week, Zach!

And speaking of Arizona, Team McGladrey Member Chris DiMarco joined McGladrey leaders and key clients in Phoenix this week for some fun on the course. We hear McGladrey Managing Partner and CEO Joe Adams and his team tied for first place, but ended up second after a scorecard playoff.  While his team might not have been victorious, the firm was by spending quality time with clients, prospects and COIs.

Next Monday is President’s Day. The McGladrey offices will be open, but we hope that those of you who have the day as a holiday enjoy the time off, and that you’ll check back in next week for more updates on Team McGladrey and the 2013 McGladrey Classic (Nov. 4 – 10).
Posted by Unknown No comments:

Love is in the Air…and a Lot of Other Places!

Last week at the 2013 Waste Management Phoenix Open, Team McGladrey Member Davis Love III, unfortunately, had to withdraw going into the second round due to a neck injury. He also had to withdraw from the AT&T Pebble Beach Tournament (which starts today). Davis is undergoing neck surgery tomorrow (Feb. 8th) so he will miss six-to-eight weeks. We’re sending best wishes for a speedy recovery his way! Leave your wishes here and we’ll be sure to pass them on to Davis. On a brighter note, we’ll be cheering on Team McGladrey Member Chris DiMarco as he plays at Pebble Beach. And Team McGladrey Member Zach Johnson will be playing  in the Northern Trust Open at Pacific Palisades, CA (starting Feb. 14). In the meantime, Zach has been a little busy with another sport – skiing! Check out the pictures Zach posted to Twitter. It looks as if he is having a great time – and we hear that no snow ball fights have broken out… yet!

We announced in December that Davis Love III won the U.S. Golf Association’s Bob Jones Award but the actual ceremony presenting the honor just took place this past weekend. Davis, who was unable to attend the ceremony, said in a statement to Golf Channel, “I am very grateful to be selected by the USGA to receive their highest honor. Just to be mentioned in the same company as the previous recipients is a nice compliment, but to have my name permanently etched alongside them on an award named after Bob Jones is a tremendous feeling.” Previous winners of the Bob Jones Award include Bob Hope, Arnold Palmer, Jack Nicklaus, Bing Crosby and others. Davis is, indeed, in good company.
Watch the inspiring video the USGA presented about Davis winning the 2013 Bob Jones Award, which features PGA TOUR past and present players, St. Simon Island locals, family members and others talking about how respected Davis is on and off the course, and about his commitment to giving back to the community.

Even more good news came for Davis last week when Stratford Golf Partners announced that Love Golf Management will manage two of its Clubs, Firethorne Country Club in Charlotte, NC and Temple Hills Country Club in Franklin, TN. Those of us working out of McGladrey’s Charlotte office hope this means we’ll see more of Davis in the future!

Check back next week as we give you more updates on Team McGladrey and the 2013 McGladrey Classic. ﻿
Posted by Unknown No comments: