A New Look for Golf Fans 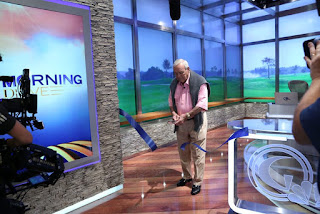 The Golf Channel’s ‘Morning Drive’ has always been one of the key resources for golf enthusiasts looking for a “golf fix.” Exciting news for viewers: Morning Drive is re-launching Feb. 4, with a new format, co-hosts and studio, and will now air seven days a week! One of the most respected and historical PGA TOUR golfers, Arnold Palmer, is a co-founder of The Golf Channel and, when  the channel debuted their new state-of-the-art studio on Jan. 29, they named it in his honor, and Palmer was on hand for the ribbon cutting of “Studio AP.” Team McGladrey members, Chris DiMarco, Zach Johnson and Davis Love III, have been featured on the Morning Drive over the years so we’ll be looking forward to watching them on the new set. Click here to read more about the new Golf Channel studio, and check out this neat video on the making of Studio AP. 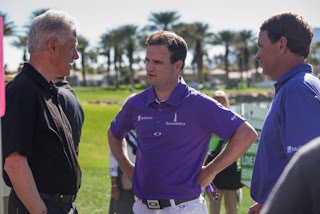 Two weeks ago, Zach and Davis teamed up at the 2013 Humana Challenge. During the tournament, Johnson and Love took a few minutes to chat with former President Bill Clinton who was there representing William J. Clinton Foundation. A cool moment caught on film!

Over the next few weeks, Team McGladrey members Davis Love III, Zach Johnson and Chris DiMarco will be taking a bit of a break from the course, as none are scheduled to play in any major tournaments. (Given the current record-breaking cold gripping much of the nation, we’re thinking their breaks are well-timed!) That doesn’t mean that they’re not busy, though. Davis, for one, is joining other PGA and LPGA TOUR professionals in Orlando for the 2013 PGA Merchandise Show, where he will attend the grand opening celebrating the show’s 60th anniversary.

Zach is scheduled to play at the Northern Trust Open starting Feb. 14 in Pacific Palisades, CA. (We wouldn’t mind spending Valentine’s Day there, ourselves!)

In other golf news, the fourth annual Farmers Insurance Open at Torrey Pines tees up this week in beautiful San Diego. Those of us at McGladrey wish the best of luck to two of our McGladrey Classic champions, Ben Crane (2011) and Tommy “Two Gloves” Gainey (2012), who are playing in the tournament. Who are your top picks to win?

We’ll post another update next Thursday, and hope you’ll check back with us then.
Posted by Unknown 1 comment:

Davis and Zach team up and 2011 McGladrey Classic champ does it again!

Congratulations to Golden Isles resident, Russell Henley, on his first PGA TOUR win at the Sony Open in Hawaii! Since the Golden Isles are home to The McGladrey Classic, it's like having a neighbor win!

Earlier this week, the PGA Show announced that Davis Love III will join PGA of America officials at the grand opening of the 60th Anniversary of the global golf industry’s PGA Merchandise Show on Jan. 24-26 in Orlando. With the cold weather headed to many of McGladrey's offices, we sure wish we could join Davis there in sunny Florida. We'll be keeping up with the show's activities from afar, though, and dreaming of warmer (more good-friendly) weather. 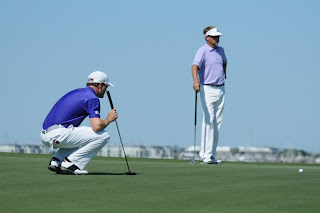 Speaking of Davis, last Friday, he committed to the 2013 Humana Challenge.  Davis will join fellow Team McGladrey member, Zach Johnson, along with Don Felder, Dean Bramlet and other golfing greats. The event, formerly known as the Bob Hope Classic, kicks off today, Jan. 17, and brings together PGA professionals and celebrities for a unique golf experience. Just a few of the celebrities lined up for this years’ event are Ron White, Anthony Anderson, Ronde Barber, Michael Bolton, Alice Cooper and many more. Be sure to tune into The Golf Channel for coverage and cheer on Davis and Zach!

Last week, 2011 McGladrey Classic champion, Ben Crane, debuted his new YouTube hit “Therapy Sessions – Slow Life.” If you've seen any of Ben's previous videos, you know this guy is FUNNY! Check out his take on his slower way of playing.

Check back here every Thursday as we provide more updates on Team McGladrey and the 2013 McGladrey Classic, scheduled for Nov. 4-10, at Sea Island, GA.
Posted by Unknown No comments:

Rolling into the new season 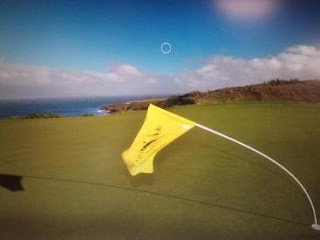 Mother nature sure gave the 2013 PGA TOUR season tournament opener a difficult start! Last week, winds got up to 40 mph during the Hyundai Tournament of Champions in Kapalua, Hawaii. Due to the weather, the tournament was reduced to 54 holes. Congratulations to champion, Dustin Johnson, for overcoming the challenging weather conditions to take home the trophy! (Check out the Twitter picture Team McGladrey Member Zach Johnson shared via the PGA TOUR from the island, showing how windy it really was.)

Speaking of Zach, as the 2013 season gains momentum, we want to wish Zach and fellow Team McGladrey Member Davis Love III good luck this week as they play in the Sony Open which kicks off today at the beautiful Waialae Country Club in Hawaii! (We have our fingers crossed for better weather on the island for this one!) PGA TOUR expert picks sized up the players at this tournament, and have Zach as their No. 1 pick! Zach won this tournament in 2009, and we’d love to see a “repeat performance!” Who are your top picks for the Sony Open? 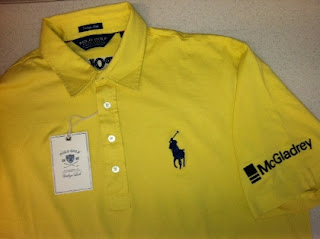 As Team McGladrey members start up their new season, McGladrey will be debuting an improved logo for our PGA golfers to wear. The logo will now be either black or white so our brand’s colors don’t conflict with other colors or patterns the players are wearing. We’ve also increased the size of the logo so it will  be more prominent.  The picture to the right shows one of Davis’ new shirts. What do you think?

Check back in next week as we talk more about The McGladrey Classic and Team McGladrey.
Posted by Unknown No comments: 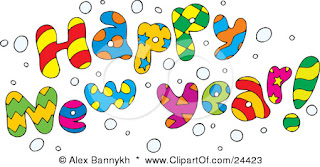 It’s hard to believe, but it’s now 2013. And this year’s golf season begins in earnest Friday with the first round of the Hyundai Tournament of Champions in Hawaii. While we won’t be there in person to cheer on Team McGladrey Member Zach Johnson and 2012 McGladrey Classic Champion Tommy (“Two Gloves”) Gainey,  we are already looking forward to returning to beautiful Sea Island this November for the fourth annual McGladrey Classic (Nov. 4 through 10)!


And speaking of The McGladrey Classic, as this New Year begins, we’d like to thank all of the fans and volunteers who have made the tournament such a success since its inception in 2010. You have helped raised more than $850,000 for Special Olympics, Boys and Girls Clubs of Southeast Georgia and other deserving charitable organizations through your support of The McGladrey Classic. Thank you for helping these organizations do so much good for so many people. We look forward to continuing to give back to the community through the game of golf in 2013, and appreciate your ongoing support!


And, of course, since it’s the beginning of another New Year, we’re curious: Have you made any New Year resolutions? If you have, we’d love to hear about them. Post them here if you’re willing to share, and check back to see what others are resolving to do in 2013. We’re resolving to make the 2013 McGladrey Classic a success. Check back here regularly for updates on the tournament and Team McGladrey member activities.
Posted by Terri Andrews No comments: