Another one in the books – The 2012 McGladrey Classic! 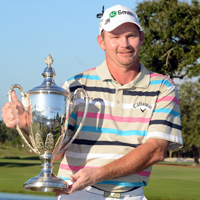 It’s hard to believe that the third annual McGladrey Classic has come and gone, been just a few days since Tommy “Two Gloves” Gainey became the 2012 McGladrey Classic champion. This was Gainey’s first PGA TOUR win and with a course record of 10 under par 60! McGladrey is proud to share this memory with him. Congratulations, Tommy, and welcome to the McGladrey family!

In case you were unable to follow us while we were at Sea Island, here is a recap of the week:

·         Monday nights Wiffle Ball Classic was a great success raising $15,000 for Altama Elementary’s Blessings in a Backpack Program. Check out the PGA TOUR’s video on this event (watch here)
·         Wednesday’s Youth Day was tons of fun while the kids played games, had their faces painted, and watched Ben Crane and Paul Stankowski hold a clinic. Following the clinic, McGladrey leaders teamed up with PGA TOUR professionals for a putting contest with Special Olympics athletes and children from the Boys and Girls Clubs of Southeast Georgia. Later that night, Gary Allan put on an amazing performance for thousands of fans.
·          Military Appreciation was held on Thurs., Oct. 18., to honor those who have served and those who are currently serving our country.
·         A very special guest stopped by the Dawg House on Thursday – UGA09 or RUSS!
·         The final tally of BIRDIES made during this year’s tournament was 1,478 for those who entered the ‘Birdies for Love’ contest. The winner will be announced soon!

On a sad note, McGladrey sends their condolences to the Steele family and friends. Last Friday, PGA TOUR caddy, Scott Steele, passed away suddenly. Black Ribbons were worn in honor and remembrance of Scott Steele during The McGladrey Classic.

Once again, we would like to thank the 1,200 volunteers who helped welcome the tens of thousands of golf fans to the 2012 McGladrey Classic!

We’re already looking forward to next year’s event which will take place in November! Go ahead and mark your calendars for Nov. 4 - 10, 2013 – we hope to see you then at Sea Island!
Posted by Unknown