We first want to send a big congratulations to Rory McIlroy on his impressive eight-stroke win this past weekend at the PGA Championship. McIlroy, 23-years old, is now the second youngest player to win two majors.


Can you believe we are just shy of two months until The McGladrey Classic? It takes place starting Oct. 15 in beautiful Sea Island, GA. Listen to what Davis has to say about the Golden Isles. Makes you want to go there, doesn’t it? 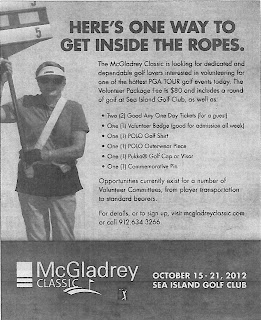 If you’d like to help out this year, we are looking for 250 volunteers. To be a part of the excitement, fill out a volunteer application.

Check in next week for more updates on Team McGladrey and The McGladrey Classic.