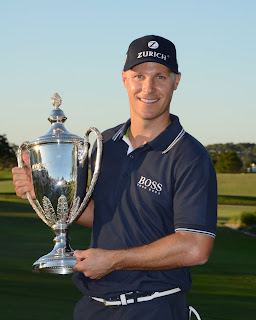 It’s hard to believe but the second annual McGladrey Classic has come and gone, with Ben Crane taking home the trophy.

In 2006, just before he turned 30, Ben was the highest ranked American golfer under that age in the Official World Golf Rankings. In 2010, he carded a final-round 70 to win the Farmers Insurance Open at Torrey Pines by a single stroke, and in October 2010, he won the CIMB Asia Pacific Classic Malaysia, an event co-sanctioned by the PGA TOUR and Asian Tour. Ben won the 2011 McGladrey Classic by defeating Webb Simpson in a playoff.

Ben is currently one of four golfers in the PGA exclusive boy band “Golf Boys,” along with Rickie Fowler, Bubba Watson and Hunter Mahan. (Farmers Insurance donates $1,000 for every 100,000 views of the video on YouTube.) Charitable proceeds support both Farmers and Ben Crane charitable initiatives.

We’d like to thank the 1,200 volunteers who helped welcome more than 23,000 golf fans to the event by showing the best in southern hospitality.

We’re heading back to our office this week, but are already looking forward to returning to Sea Island next October!
Posted by Terri Andrews