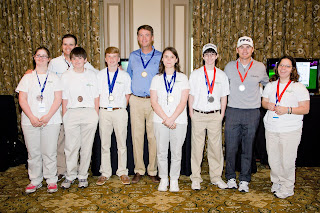 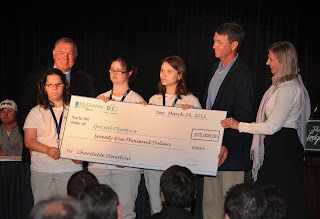 Throw in three popular PGA TOUR professionals, one of them last year’s champion, add McGladrey executives and some participants from the local Boys & Girls Clubs and Special Olympics, include 100+ invited guests and you have the makings of an extremely successful launch for the 2011 McGladrey Classic.

It was a standing room only crowd at Sea Island Resort on Monday, March, 28 as McGladrey and the Davis Love Foundation officially kicked off ticket sales and sponsorship opportunities for this year’s McGladrey Classic, being held October 10-16.

“Thank you, McGladrey, for doing a lot for golf and doing a lot for charity,” said Davis Love III during his opening remarks. “Last year’s success will be hard to beat, but we are going to keep going and keep doing more for the community and charities.”

“Going into Year Two, we remain committed and focused on making The McGladrey Classic the highlight of the entire PGA TOUR,” said C.E. Andrews. “We set out to host an event that provided our partners with a great opportunity to enhance relationships with our clients and prospects, and to strengthen our brand regionally, internationally, and everything in between. We accomplished that and then some.”

Andrews received a round of applause when he announced a new contest McGladrey will sponsor beginning in late May. Called “Caddie for Love,” one lucky golf enthusiast who wins the contest will get the chance to caddie for Davis during The McGladrey Classic Pro-Am on October 12. The winner will also be invited as an honored guest to the pairings party held at Davis’ home the night before. “Who wouldn’t want the chance to say they caddied for the next U.S. Ryder Cup captain,” Andrews asked.

The official “Caddie for Love” contest website will launch on May 23. You can follow the contest and vote for who you believe should be the final choice. Look for more information right here on the blog and on Twitter, Facebook and on www.mcgladrey.com.

Representatives from Special Olympics and the Boys & Girls Clubs of Southeast Georgia were on hand to receive the $75,000 check awarded to each charity from the inaugural McGladrey Classic. Then, the kids got a special treat and a chance to compete in Wii golf on teams led by Davis, Zach and Heath. The winners – Davis’ team! Let’s hope this is a harbinger of good things to come for the U.S. in the next Ryder Cup.

For more information about the 2011 McGladrey Classic go to www.mcgladreyclassic.com and follow the tournament on Twitter at @McGladreyClssc and on Facebook at www.facebook.com/McGladreyClassic.
Posted by Heather Fueger