A week full of excitement for Team McGladrey 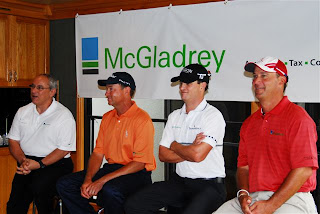 We hope everyone enjoyed the 4th of July holiday. It's difficult to believe we are halfway through the year already! Speaking of the 4th of July, congratulations to Justin Rose on his win at the AT&T National on Sunday!
It's been a week of great news for Team McGladrey. Things got kicked off on Monday with Zach Johnson's announcement that he and his wife Kim have created the Zach Johnson Foundation to aid children in need in the Cedar Rapids, IA area. The creation of the Zach Johnson Foundation will build on the success of "Birdies that Care", which Zach has been involved with for several years, so more children can receive the support they need early in life. The Zach Johnson Foundation Classic will be the premier event for the Foundation. It will be a Pro-Am tournament that will feature at least four PGA TOUR players as well as some of the game's future superstars. It will take place at Elmcrest Country Club in Cedar Rapids on August 1, 2011 and will be an annual event.
Last week we promised you not only Zach's announcement, but also one of our own. We are thrilled to announce that Team McGladrey is now a foursome with the addition of Davis Love III to our team. It was also announced that the endorsement agreements with Chris DiMarco, Zach Johnson and Natalie Gulbis have all been extended. The announcements were made this past Tuesday at that John Deere Classic in Silvis, IL where DiMarco, Johnson and Love are all competing this week. Following the announcement, Chris, Zach and Davis visited with some clients of McGladrey and participated in a question and answer session.
Unfortunately Natalie wasn't able to join the guys in Illinois, but there is a good reason for that, as she is in Pennsylvania getting ready to play in this year's U.S. Women's Open Championship which will be contested at Oakmont Country Club. Natalie has tweeted in the past several days that the course should be a great test of golf and that the facility is fantastic. We wish her and all of the other competitors the best of luck.
Don't forget to check out The McGladrey Classic website for all of the latest news and information about the tournament. It's going to be a great event!
Posted by Heather Fueger