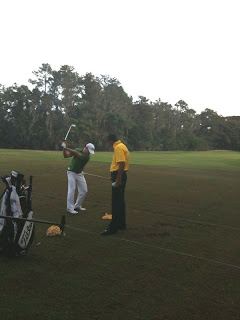 We were all anxiously watching The Weather Channel as Hurricane Ida plodded toward the Gulf Coast with 100 mph winds, bringing the threat of flooding and storm surges. Fortunately, however, it turned out to be beautiful here at Disney so, in spite of my fellow Team McGladrey Member Chris DiMarco’s tardiness (couldn’t let the opportunity to rib a good teammate pass me by!), we were able to play the back nine.

The Children’s Miracle Network Classic is one of my personal favorites – a great cause, beautiful courses and a laid-back setting that provides opportunities for family members to join you for a good time and good food at Disney World. In fact, I met my wife Kim and son Will at Epcot for dinner Tuesday evening, after they spent the day at the park. It’s always a treat to be able to fit in some good quality family time while playing.

One of the interesting things that took place this week was filming and a photo session for an upcoming RSM McGladrey ad, which will feature my caddie Damon Green and me talking about “the power of being understood” on the golf course, and how that understanding can translate into winning results. One of my favorite examples of this was in Augusta in 2007 when Damon and I really leaned on one another to win The Masters. Slipping on that Green Jacket was truly a dream come true, and talking about that experience this week brought back great memories. Damon even re-enacted his famous chicken dance, which he performs after each of our wins. Priceless!

The Children’s Miracle Network Classic is my last PGA Tour event of the season. I’ll be playing twice more in PGA Tour-sanctioned events this year: the Chevron World Challenge in Southern California, hosted by Tiger Woods (Dec. 2 – 6), followed by The Shark Shootout in Naples, hosted by Greg Norman (Dec. 9 – 13). After that, I’ll be taking a break until January, when I’ll begin the season with the Mercedes Benz Championship in Hawaii. Until then, keep an eye out for RSM McGladrey’s “power of being understood” ads featuring Damon and me. Following those ads, you’ll see a version featuring Chris and his caddie Ryan Rue…assuming they weren’t running too late for their filming and photo session…
Posted by Terri Andrews