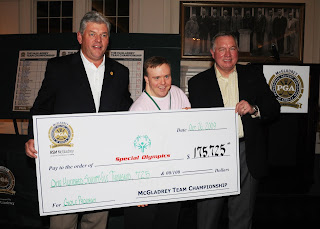 The 2009 McGladrey National Team Championship is now behind us, but…the “buzz” continues!

We’ve uploaded a brief video to our YouTube channel (McGladreyNews, for those of you who might be interested in checking out other videos on our channel), which shows highlights from our live auction to benefit Special Olympics golf program. We hope you’ll take a few minutes to view it (You’ll be amazed by how much the autographed Peyton Manning jersey and the Sheryl Crow guitar raised!), and to let us know what you think. In the meantime, we’d like to give a special thanks to everyone featured in the video, including:

• LPGA Tour Professional Natalie Gulbis for her opening remarks and overall assistance with the auction,
• The PGA of America’s CEO Joe Steranka for his kind words about the importance of sponsorships and about RSM McGladrey, and
• best-selling author, Golf Channel reporter and host of The PGA TOUR Network’s “Fairways of Life,” Matt Adams, for emceeing the auction.

Particular appreciation goes to Special Olympics Global Messenger Carl Hibbert Jr. Thank you, Carl, for sharing your thoughts about what your personal experience with Special Olympics has meant to you. Your heartfelt words served as a real-life example of “the power of being understood.”

Last but not least, while they weren’t featured in the video, we’d also like to express our appreciation to fellow Team McGladrey Members Chris DiMarco and Zach Johnson for joining us in Pinehurst for The 2009 McGladrey National Team Championship – proving once again that, with the right team, anything’s possible!
Posted by Terri Andrews